What are the Roslyn analysers?

As you should already know Roslyn is the name of new C# 6.0 (and Visual Basic) compiler, written entirely in C# (and VB for the VB one). The old compiler was written in C++ and this is a complete re-implementation. You can find Roslyn’s source code on GitHub.

However Roslyn is not just a compiler. It’s also and SDK (“.Net Compiler Platform”) which exposes the compiler as a service. Tools (such as Visual Studio, ReSharper, CodeRush, LinqPad) can directly hook into the syntax tree information exposed by the compiler to achieve various jobs such as code auto-completion, refactoring and code analysis. Previously those tools had to implement their own C# code parsing, effectively duplicating the compiler’s job. It’s a non-trivial task, so that’s why libraries such as NRefactory became popular. You will find it used across various tools - e.g. LinqPad, Xamarin Studio (I think).

In simplified terms Roslyn analysers are plug-ins that plug into the Roslyn compilation (parsing) pipeline and are able to spit out warnings and errors whilst editing code in Visual Studio and during compilation. They can also provide “code fixes”/refactorings.

I am not going to drill into the details of how the analysers are implemented or how to implemented one in this post, but focus more on how to use them across a team and continuous integration.

You can get all source code from this post at: https://github.com/ivanz/RoslynAnalysersUsageSample

The easiest way to get some extra analysers is to install the really good VS Refactoring Essentials analysers pack, which contains around 100 of them (and lots of refactoring tools).

Once you have them installed you will start seeing some warnings, such as this one:

Update: You may see sporadic MissingAnalyzerReference warnings with Refactoring Essentials and StyleCop to do with Visual Basic, which you can safely ignore. This bug is tracked in this GitHub issue.

This is great, however it’s not really useful unless everyone in the team has the extension installed, which on its own can be difficult to enforce or manage consistently.

I am using the Solution Error Visualizer plug-in as part of the free Productivity Power Tools for Visual Studio 2015 extension by Microsoft. This is where the underlining in the Solution Explorer of errors and warnings comes from.

Using Roslyn analysers as NuGet packages in a project

This brings us to the second option of using Roslyn analysers, which is to install them as a NuGet package in all projects in the Visual Studio solution.

Note that Visual Studio/Roslyn will handle that you could have the same analyser installed both as an extension (globally) and as a NuGet package (locally) and this won’t lead to duplicate warnings. However there is a bug where code fixes will be duplicated which is tracked here.

Once installed you will notice the analyser under the new Analysers section under References: 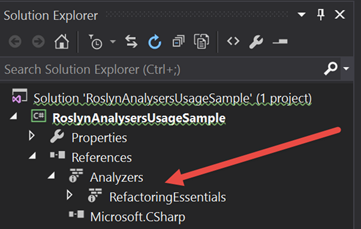 And if we look at the content of the .csproj file we will see this:

The downside is that we have to ensure that every new project added to the solution has the analyser NuGet package added to it, but automating that is not that hard (e.g. using pre-commit hooks in Git).

We can edit the current rules set by right clicking on Analysers and then changing the warning level: 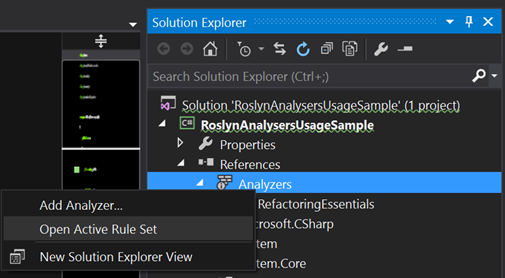 Once saved a new file will shop up in the project RoslynAnalysersUsageSample.ruleset and if we open it we will see that the configuration has been added to the XML:

This is the same Rules Set file that we know from previous version of Visual Studio, which used to contain FxCop based rules. However an important note for those familiar with FxCop based Code Analysis rule sets is that all Roslyn analyser rules are enabled by default (in FxCop you had to add the rules explicitly).

Let’s add a new project to the solution with the Refactoring Essentials NuGet package installed and copy paste the class above into the new project. We will notice that our custom Error level for the RECS0145 rule is not applied. And that’s because our previous customization only applied for that single project we edited: 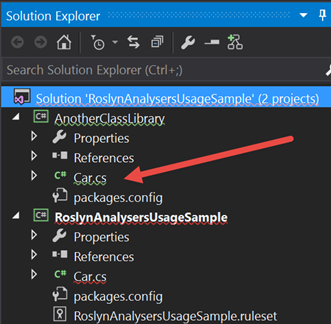 To remedy that we need to:

In those rare cases when there is a warning, but there is a valid reason why we have done something the way we have done it the System.Diagnostics.CodeAnalysis.SuppressMessage attribute can be used (or evil evil #pragma).

No extra work is required if the code analysers are added to the solution as NuGet packages and included under Analysers.

There are two things to be aware of though:

I hope it was useful to you guys. Let me know in the comments!